jodiemarshtv  Last night for my 40th birthday I had my now FAVOURITE rock n roll band The Baldy Holly Band, play 50’s rock n roll all night. It was the best night of my life!!!!!!!! The band were the best thing I’ve ever seen! I will be booking these for all future events as simply there is no one who will ever match up now!!! My perfect night!     JODIE MARSH – media personality, model, bodybuilder and columnist. December 2018 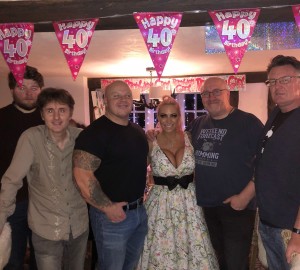 With a great night behind me, early the next morning I headed for Geordie land where I was to perform a fundraising event in Newcastle for one of the nicest guys I’ve ever met. His enthusiasm for RnR and his generous nature are second to none and his name is Jamie. Along with his group they’re known as Baldy Holly and his band and the show was a fundraiser for a charity Jamie is a trustee of,  Beach Access North East, raising £4,000 for Wheel Chair access. Amazing! Along with some excellent bands, Jamie had a surprise when he introduced from America, Austin Allsup. Austin is the son of Tommy Allsup who originally played guitar for Buddy Holly. Once again a great night and I was especially grateful for the reception I got for firstly for my talk and slide show on the early days of Rock ‘n’ Roll, and for my performance later in the evening when I was backed brilliantly by Jamie and his band.    VINCE EAGER – British Rock and Roll star, West End stage performer and writer.  October 2018 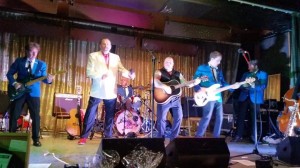